(Minghui.org) A book launch for Bloody Harvest was held by the Epoch Times in Singapore on the afternoon of July 8, 2012.

One of the authors, well-known Canadian human rights attorney Mr. David Matas, participated in the book launch, but he was unable to make a speech to the public because the local police temporarily cancelled the permit. The Epoch Times’ President Mr. Lim made a speech on his behalf. The organizer and the attendees found it hard to understand the police’s act. 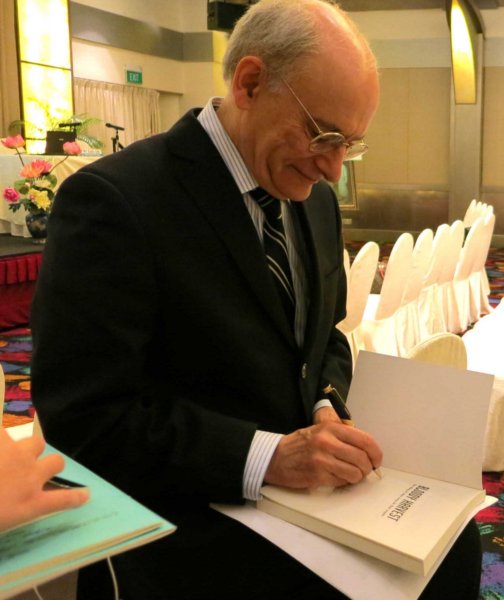 The Epoch Times’ President Mr. Lim at the book launch

Mr. Matas answered questions raised by the media. He believes that Falun Gong practitioners’ cultivation of Truthfulness, Compassion and Forbearance is almost a mirror image of the Chinese Communist Party’s (CCP) lying, cruelty, and intolerance. He said that the investigations on the organ harvesting from living Falun Gong practitioners and the publication of the book in both English and Chinese have achieved a certain effect in raising awareness in the international community about the true situation. Over the past six years, he has been trying to mobilize the public’ concern over the CCP’s killing people for their organs, so as to end the abuse as soon as possible.

Mr. Matas told the reporter that during the investigations, there have been lots of obstacles, cancellations, blockages and some threats. He and Davild Kilgour are just two people, but the other party is the CCP that holds vast national resources. Mr. Kilgour and he have persevered and continued with this difficult job with great patience. He said that as a human rights lawyer, he can’t turn a blind eye to such a crime.

Mr. Matas said that he wanted to ask some people, “Why in the world are you doing nothing, what motivates you to say nothing in the face of this abuse? Surely when people are being killed for their organs, you should do something about it.”

When being asked about his new book State Organs: Transplant Abuse in China, Mr. Matas said that there is no doubt that this heinous crime of live organ harvesting is still ongoing in China. In the new book, coauthored with other doctors, they confirm this crime with the updated figures. Even though the CCP is not transparent, a lot of new data has been released since 2009. According to the latest statistics, such as the number of prisoners sentenced to death and the number of transplants in China in recent years, he wrote an essay, and together with other doctors’ essays, they consolidated them into the new book.

Mr. Matas explained that mankind’s research and the development of organ transplant technology was originally to save people, but now the CCP abuses it to murder people for profit. For this reason, the organ transplants should have a certain code of ethics. In addition, he called upon the Singapore medical profession to learn more about the situation and adhere to their professional ethics. They should not send doctors to China to participate in organ transplants.

The Epoch Times President Mr. Lim said that it is of great significance to introduce this book Bloody Harvest to local people. He said that, Singapore readers, influenced by the mainstream media, are generally not concerned about or are unwilling to be concerned about the persecution of Falun Gong. If they have an opportunity to come to know such an evil thing, and see the factual evidence, they would be moved and re-examine their opinions and attitudes toward Falun Gong.

Audience member Mr. Zhang thanked Mr. Matas for visiting Singapore. He said that Mr. Matas and Mr. Kilgour’s efforts in their independent investigation over the past six years and their courage are admirable. When many of the world’s people are eager to please the CCP, the two authors go against the trend and choose to expose the evil. For Singaporeans, it is very important to learn about the crimes committed by the CCP and be aware of the truth.

On July 6, 2006, after a comprehensive investigation, David Kilgour and David Matas released a 68-page long report: Report into Allegations of Organ Harvesting of Falun Gong Practitioners in China- to the media in Ottawa. The report refers to the crimes committed by the Chinese regime as “a form of evil yet to be seen on this planet.”

The report was revised three times and the book Bloody Harvest–The Killing of Falun Gong for Their Organs was published in October 2009.

Over the past years, Matas and Kilgour have travelled to more than 40 countries and over 80 cities to expose the CCP’s atrocities of harvesting organs from living Falun Gong practitioners. They hope to end this crime as soon as possible.

David Matas was nominated for the Nobel Peace Prize in 2010 for his work related to the investigation of organ harvesting crimes against Falun Gong practitioners in China.