September 06, 2015 | By a Minghui correspondent from Shandong Province, China

(Minghui.org) Because of his belief in Falun Gong, Mr. Tian Xinfang was arrested five times and imprisoned twice for a total of 9 years and 11 months.

In 2002 he began a 4-year prison term, and in 2008 he started a 5-year sentence. He was brutally tortured in more than 10 different ways and given four suspicious major blood tests and physical exams. Prisons systematically perform blood tests and organ checkups on Falun Gong practitioners. Mr. Tian witnessed a very healthy practitioner mysteriously disappear soon after one such checkup.

For every major exam, a bus with sophisticated medical equipment arrived at the prison. Every detainee was examined, but only the results for Falun Gong practitioners were documented.

Besides blood tests, the checkups included tests for eyesight, color blindness, and heart and liver function. Doctors palpated the heart and liver and asked if there was any pain. They also did X-rays. According to other prisoners, these major checkups only started after Falun Gong practitioners arrived at the prison.

Soon after a major exam in 2002, Falun Gong practitioner Mr. Wang Wenping disappeared. The deputy warden claimed that Mr. Wang died from cancer three months after he was released. However, people remember Mr. Wang as being extremely healthy and energetic before he disappeared.

Mr. Wang had retired from the Daqing Petroleum Company in Shaoxin City, Zhejiang Province. He was about 60 and was sentenced to 10 years in prison for his belief. Mr. Wang was very good at sports. His mind and body were extremely quick when he played table tennis and basketball with younger adults. A prison guard often asked him to play table tennis because he was so good at it.

Tortured in the Second Prison in Zhejiang Province

In order to avoid arrest at home in Heze City, Shandong Province, Mr. Tian went to live in Leqing, Zhejiang Province, in early 2002. He was arrested in March that year for distributing Falun Gong materials and subsequently sentenced to 4 years.

Not long after he was admitted to the Second Prison in Zhejiang Province, because he refused to give up his belief, he was detained for nine days in a 10-foot-square solitary room without a window. There he was shocked with electric batons, was forced to stand for 16 hours per day, and was not allowed to leave for the bathroom or meals. His left toe festered and has not healed since he left the prison four years ago.

Mr. Tian’s drinking water was restricted, and he was only allowed limited bathroom use. He could only take cold water showers. He was forced to work under the sun when the temperature was 104 degrees. For 10 days, he was forced to sit on a small stool in a fixed position for 15 hours per day.

In June 2003, Mr. Tian was forced to stand for 15 hours a day for 21 days in a room far away from the prison. There the police used three electric batons to shock to him for three hours. This happened multiple times.

When Mr. Tian served his second prison term in Taian Prison, Shandong Province, he actively talked to other inmates about Falun Gong. Two prisoners started to practice with him. Through Mr. Tian, many prisoners supported Falun Gong and quit the Chinese Communist Party.

One of the prisoners was in charge of printers in the prison. Through Mr. Tian and other practitioners, he obtained a flash drive with the contents of Zhuan Falun and printed it. The printout was discovered and someone reported it to the guards. The guards dared not report it to their supervisors and tortured Mr. Tian instead.

The following are some of the forms of torture that Mr. Tian endured.

The police once put Mr. Tian in solitary confinement for two and a half months. For a period of time, he was locked inside a 10-foot-square cell 24/7. He was not allowed to use the bathroom and had to use a bucket in the cell.

Mr. Tian protested with a hunger strike. He explained to the guards and prisoners that he had to, because he was not allowed to use the bathroom. He was allowed to return to a normal cell after three days on his hunger strike.

Sitting on a small stool

For more than two years, the police forced Mr. Tian to sit on a little stool for more than 10 hours per day to watch videos defaming Falun Gong. Mr. Tian refused to give up his belief, and encouraged other practitioners not to give up their belief. He held hunger strikes twice to protest. The guards beat and force-fed him.

Thrown to the floor during hunger strike

When Mr. Tian was on a hunger strike, he was lifted up by several prisoners and then thrown from three feet to a hard ceramic tile floor. This was repeated several times.

The guards stuffed Mr. Tian’s mouth with dirty mops. They also force-fed him with water from a toilet bowl.

Slapped with shoes, feet stomped on, and forced to do a split

Mr. Tian’s face was slapped with a leather shoe more than 10 times. One week after Mr. Tian started a hunger strike, he was forced to stand. One prisoner kicked his leg. Another prisoner stepped on his right foot. Mr. Tian was also forced to do side splits repeatedly, causing extreme pain to his legs.

Squeezing the fingers against a shoe brush

The guards put a shoe brush between Mr. Tian’s fingers and then forced his fingers against each other until the brush broke. 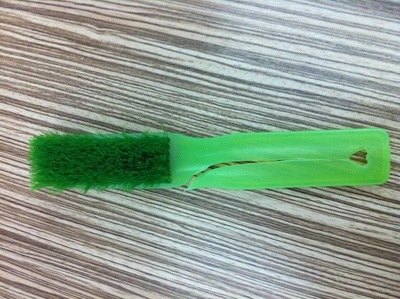 The guards poured chili oil into Mr. Tian’s anus. Then they used the bottom of a shoe and a piece of wood to slap his buttocks several dozen times. Then they sprinkled salt into the wound. Several people pressed Mr. Tian’s wounded anus onto a bench and turned him to cause more pain. This torture lasted for two days.

When Mr. Tian held a hunger strike, he was often force-fed with concentrated salt water, making him more thirsty. He was also forced to take an unknown drug twice. Afterwards he was not able to speak properly and he became confused.