(Minghui.org) Eleven practitioners who had been tortured in China in the brutal persecution of Falun Gong filed lawsuits against Jiang Zemin, the former Chinese dictator who started it all. Nine of them protested in front of the Chinese Embassy on August 16, 2015. 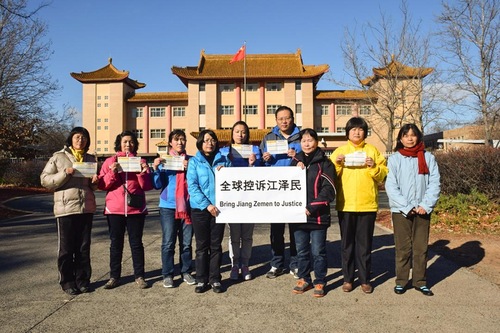 Falun Gong practitioners who have filed criminal complaints against Chinese former dictator Jiang Zemin protest in front of the Chinese Embassy in Canberra, Australia on August 16, 2015.

Ms. Li Min and Mr. Zhang Yong, two of the 11 plaintiffs, both are graduates of Tsinghua University.

Li Min, worked in Beijing Tsinghua Holding Shuimu Construction Engineering Co., Ltd after finished her Masters degree. She was jailed in Beijing Woman’s Forced Labor Institute for 2 years, detained many times, house-ransacked and was restrained from business trip abroad. She was injected unknown medicines while in forced labor institute.

Zhang Yong, a student of Electric Engineering department, worked for Dalian City Electronics Research Institute after graduation. He was charged to 2 years of forced labor in 2003 and jailed in Dalian Forced Labor Institute, where he was handcuffed between a high bed and a low bed (see image below) for 24 hours resulting in severe damages to both hands and legs. He has not recovered fully from the tortures after arrived in Australia for years. 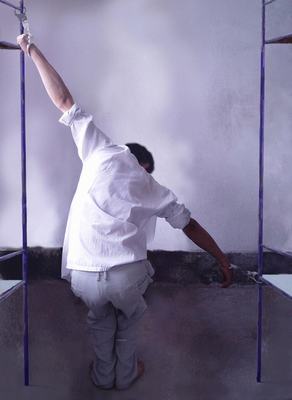 Torture re-enactment: Stretched and forced to stand in awkward position

Zhang’s wife Yu Manhua was also charged to 2 years of forced labor in 2003 during which was injected unknown medicines and forced to work 12 hours a day.

Chen Hong, another torture victim of the persecution, had her house ransacked 5 times. She was detained 2 times (once for 40 days and then for 32 days) in Tianjin City. She was jailed in Tianjin City Banqiao Woman’s Forced Labor Camp for 1 year where she had to work 14 hours a day sitting on a small stool. Long hours of sitting resulted in cuts in her buttocks, hematochezia, and varicose veins.

A practitioner from Guangdong province, Yang Huici had one rib broken while being beaten at Qianmen Police Substation in Beijing. In 2001, she was handcuffed behind the back with one arm over her shoulder and the other behind her waist until she lost consciousness 3 times.

She was also charged to one and a half years of forced labor in Guangdong Province Woman’s Forced Labor Institute.

Chen Guan, a practitioner from Zhaoqing City Guangdong Province, had been jailed in brainwashing institute multiple times in 2001, 2002, and 2004. The longest one was 3 months.

All the 11 torture victims have mailed their complaints to the Supreme Procuratorator and Supreme Court of China in Beijing.

September 14, 2015 | By a Minghui correspondent from Hebei Province, China

They are all detained at the Changli County Detention Center and have been on hunger strikes since to protest the persecution. Their protest has fallen on deaf ears and the three women are now emaciated.

Before going to Beijing, the three practitioners went to the Changli County Appeals Office in late August 2015 and filed compensation claims for economic losses due to the persecution they have experienced after the Chinese Communist Party began persecuting Falun Gong in July 1999. However, the director of the local appeals office ignored their motions and instead ordered police officers to abuse them. Two officers sprayed unknown substances on Ms. Lang’s and Ms. Hu’s faces, and as a result, red spots erupted all over their faces and necks.

Since the local office refused to accept their appeals, the three practitioners went to Beijing to appeal to the Supreme People’s Court and the Supreme People’s Procuratorate on August 24, in an attempt to claim compensation for their losses incurred during the process of suing Jiang Zemin. No one received them.

Next, they went to the State Council Appeals Office. As they waited to submit their appeals, they were monitored by officers posted in Beijing from the Qinhuangdao City Domestic Security Division.

Ms. Hu escaped from the Anshan Police Station and went to her eldest sister’s home the next day. Officers re-arrested her and took her back to the police station.

After Ms. Hu’s second eldest sister requested her release, she was summarily held for approximately three hours while police ransacked her home. She was then released.

Ms. Hu was taken to the Changli County Detention Center on August 25, and her second eldest sister went to see her on August 26. Officers said that Ms. Hu would be detained for 15 days.

Ms. Lang escaped from the Ruhe Police Station on the morning of August 25. However, after officers found her, they beat her in the street, arrested her, and took her back to the police station.

(Minghui.org) Since May of this year, more than 160,000 Falun Gong practitioners have filed criminal complaints and lawsuits against former Chinese leader Jiang Zemin for persecuting Falun Gong. Although the plaintiffs should be protected by law, a number of the practitioners have been harassed by local policemen who obtained their identities and addresses from the complaint files.

However, due to practitioners’ ongoing efforts to expose both the illegality and brutality of the 16-year persecution, many police officers no longer want to get involved in harassing law-abiding citizens. Some have just carried out their orders perfunctorily, and simply walk through the process.

Below are accounts of three encounters that took place recently between Falun Gong practitioners and police officers in Jilin Province. In all of these cases, the police stopped the harassment and no further action was taken against the practitioners.

“You cannot leave until I finish”

A police officer came to my house with the original copy of my criminal complaint against Jiang.

He asked, “Did you write this, including your name and address?”

“Good handwriting. Who suggested that you file the complaint?”

“The new Chinese law,” I said.

The police officer remained silent. I took this opportunity to say to him, “I am a rational person and do not easily believe just anything. However, after I read the book Zhuan Falun, my views of the world and life changed. I found the real meaning of life.

“Our Master teaches Truthfulness-Compassion-Forbearance and asks us to consider others’ interest before our own. I also learned that being selfless is the only path to happiness.”

The police officer prepared to leave. I held him, “You cannot leave until I finish. I am telling you: do not persecute Falun Gong. I hope that you will try your best to protect Falun Gong practitioners in the future. If you persecute Falun Gong, you will bring shame to your ancestors and children.”

As the officer left my home he ran into my neighbor outside. My neighbor said to him, “Falun Gong people are so good. They touch our hearts, and what they have been doing [filing criminal complaints against Jiang] is very encouraging.”

The police officer said nothing and quickly moved on.

One asked, “Did you file a criminal complaint against Jiang Zemin?”

“Do you have any Falun Gong materials at home?”

“No. You guys have taken away everything.”

“Do you have any Falun Gong books?”

“Where did you get your complaint printed out?” he continued.

“I cannot tell you. Actually you are all victims of Jiang Zemin’s crimes. You do whatever your boss tells you, but you don’t know what you are doing. If Falun Gong is not good, how come it is practiced all over the world? You should remember that Falun Dafa is good. It is good for you.”

“You didn’t answer my questions. But that’s okay. Weren’t you afraid that you would get in trouble when you exposed your identity and address in the complaint?”

“No, I am not afraid. I wouldn’t have done so if I had fear. I actually included everything so as to prove my identity.”

The police officer turned to his co-worker and said, “There are so many plaintiffs in our area. I guess there must be many thousands of complaints against Jiang throughout the country.”

One asked, “Can you show me how you do the sitting meditation?”

I did so, and they all watched. One remarked, “The energy channels in her body are all open now, when she is doing the sitting meditation.”

One officer asked me, “Are you sure that you guys will win the lawsuit?” I answered, “One hundred percent positive. What we want is our basic human rights.”

The officer asked me if I had gotten a receipt indicating that my lawsuit had been received, and I told him that the Supreme Court had sent the receipt to my cell phone.

One police officer suggested that they search my house, but the other said, “What for? There is nothing in her house.” Then they left.

A police officer called me, “Did you file a lawsuit against Jiang Zemin?”

“I sued Jiang because he has persecuted me.”

The police officer then said that he had the original copy of my complaint.

I said to him, “That is not right. How could it end up in your hands? Are you from the Supreme Court in Beijing? Are you in charge of this case?”

He started to hedge, “Not really. My boss asked me to call you.”

I said, “My complaint is protected by law, and what you are doing is against the law. Who is your boss?”

“Why do you need to know who my boss is?”

“Because I will sue him!”

The police officer quickly hung up the phone.

In 1999, Jiang Zemin, as head of the Chinese Communist Party, overrode other Politburo standing committee members and launched the violent suppression of Falun Gong.

The persecution has led to the deaths of thousands of Falun Gong practitioners over the past 16 years. More have been tortured for their belief and even killed for their organs. Jiang Zemin is directly responsible for the inception and continuation of the brutal persecution.

Under his personal direction, the Chinese Communist Party established an extralegal security organ, the “610 Office,” on June 10, 1999. The organization overrides police forces and the judicial system in carrying out Jiang’s directive regarding Falun Gong: to ruin their reputations, cut off their financial resources, and destroy them physically.

Chinese law now allows for citizens to be plaintiffs in criminal cases, and many practitioners are exercising that right to file criminal complaints against the former dictator.

Category: People in China Awaken to the Truth