(Minghui.org) Falun Gong practitioners in Finland held a rally in front of the Chinese Consulate on September 29, 2015, to protest the persecution of Falun Gong in China that has continued for 16 years and to demand that Jiang Zemin to be brought to justice.

Since May of this year, more than 180,000 Falun Gong practitioners both inside and outside of China have filed lawsuits or criminal reports, charging the former head of the Chinese Communist Party (CCP) with persecuting Falun Gong.

One practitioner, Ms. Lin, listed the crimes Jiang has committed since 1999, including his launching of the persecution, the creation of the 610 Office, and the systematic harvesting of organs from living Falun Gong practitioners. 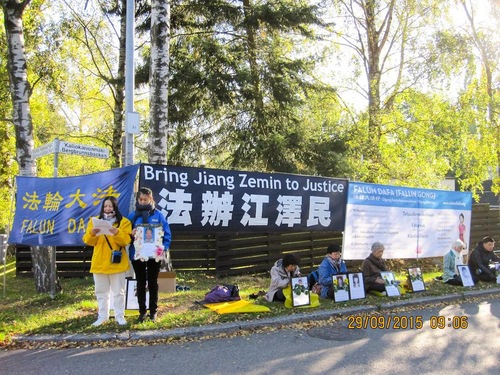 Mrs. Zhu Luoxin, another practitioner, recounted the persecution she and her family endured in China. She was sentenced to 10 years in prison for practicing Falun Gong. Her husband Wu Zhiping was held in a forced labor camp for 2 years.

The couple had been separated for 11 years before they finally reunited in Finland. Of the six people in their family who practiced Falun Gong, two of them lost their lives due to the persecution. Luoxin and Zhiping mailed their indictment against Jiang in June of this year.

Mrs. Zhu’s mother-in-law, a retired vice president of a Chinese hospital in her 70s, was sentenced to 7 years in prison for refusing to give up practicing Falun Gong. She died in February 2006. Ms. Zhu’s aunt, a retired middle school teacher in her 60s, was picked up by the 610 Office 3 times and tortured brutally, before she died in 2004. Ms. Zhu’s brother-in-law Wu Zhijun was sentenced to 8 years in prison. Her sister-in-law was also held in a forced labor camp.