(Minghui.org) India is a land of festivals, celebrating the seasons and the elements of nature elements, colors that light up people’s lives, and of course the battle between good and evil.

At the recently-concluded Dussera Festival in Mysore, a group from Bangalore demonstrated the Falun Dafa exercises at a pavilion near a temple. Festival-goers noted the practitioners’ tranquility, and many wanted to learn the meditation practice. They also heard about the persecution of Falun Dafa practitioners in China by the communist government. 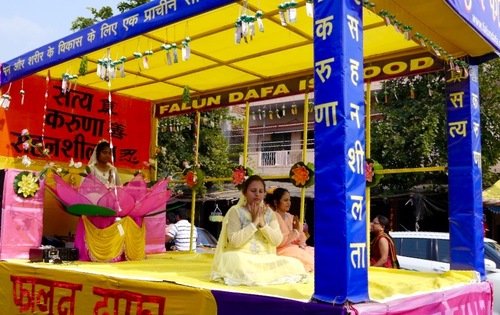 The Falun Dafa float moves along a busy street at the Dussera Festival in Mysore, India.

A local politician learned the exercises and bought Falun Dafa books, saying that he would introduce the practice at his office.

In Nagpur, practitioners showed the exercises, distributed flyers, and offered books for sale at a large booth. The locals there still have fond memories of two performances from years prior by the Divine Land Marching Band, made up of Falun Dafa practitioners.

For the first time in India, practitioners crafted floats and demonstrated the exercises on moving vehicles, drawing large crowds and frequent applause.

After local cable networks and press covered the event, phone calls poured in from locals who wanted to learn the exercises. 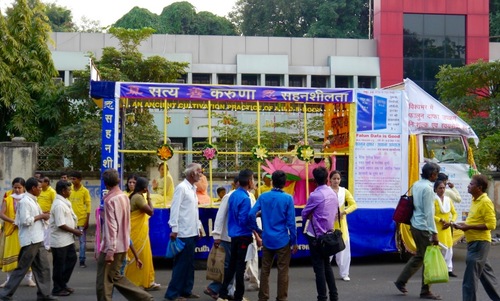 Practitioners demonstrate the exercises as their float moves through Nagpur, India.

November 07, 2015 | By a Minghui correspondent in Shandong Province, China

(Minghui.org) Mr. Li Zewen from Pingdu City, Shandong Province was arrested on October 19, 2015 for telling the public about the persecution of Falun Dafa in Shahe Town, Laiyang City.

Based on a tip from a worker who heard Mr. Li, two Shahe police officers arrested Mr. Li. At the police station, officers performed a body search and took his watch, cell phone, and cash.

Mr. Li maintained that practicing Falun Dafa is his constitutional right, and that Falun Dafa teaches people to be improve their morality.

Police removed his handcuffs at 3 p.m., so he could use the toilet. One young officer said, “You Falun Dafa practitioners are really determined.”

Back from the toilet break, Mr. Li asked the officers not to use handcuffs, but they refused. After Mr. Li continued defending his innocence, seven officers punched and slapped him. One of them landed a heavy blow on his jaw and knocked him unconscious.

After Mr. Li woke up, he told the officers, “I did not do anything illegal. You should not treat practitioners this way. You should stop doing evil for your own good.”

An officer smiled and said on his way to the front entrance, “You should stay home and read your books.”

At the time of writing, Mr. Li’s left shoulder still had a big bruise.

(Minghui.org) Years ago when I owned a hair salon, two officials from the local judicial system visited my shop and tried to get me to write statements to renounce my belief in Falun Gong.

I explained that Falun Gong practitioners like me were simply following the principle of Truthfulness-Compassion-Forbearance to be good people and we should never have been persecuted for our spiritual belief in the first place.

I reminded the two officials of the karmic principle of what goes around comes around and urged them to stop following the Chinese Communist Party’s orders to harm law-abiding residents. After all, the last thing I wanted to see was for anyone pay for crimes that could have been prevented.

One official agreed, but the other continued to carry out the persecution policy. It wasn’t until one year later, when his son was hit by a pickup truck, that he began to repent what he did to Falun Gong practitioners. As he changed his heart, his son’s condition improved. The official eventually quit his post so that he would not have to be involved in the persecution anymore.

I now share this official’s story to serve as a compassionate warning to those who are still following the regime to persecute practitioners.

Two government officials, Han and Lee, came to my shop and tried to force me to write guarantee statements to renounce and defame Falun Gong. “There’s nothing wrong with practicing Falun Gong,” I said and told them how I strive to be a good person.

Lee said, “If it is that good, I’ll practice in the future.”

Han, however, used a forceful tone on me, “It’s for your sake that I’m asking you to give up your practice. If you don’t, you’ll be sent to a ‘re-education’ facility.”

“There is nothing wrong with following Truthfulness-Compassion-Forbearance,” I said. I reminded him of the karmic principle of what goes around comes around, as I knew everyone should be held accountable for their actions and I only wanted the best for him and his family.

Han didn’t listen. Not long after, I noticed that he had put up a poster that defamed Dafa in front of the post office where his wife worked as the director.

On a spring afternoon the following year, Han’s wife received a call that her son was seriously injured after being hit by a pickup truck. I heard the news and went to the town’s hospital. Han was out harassing practitioners, while his wife was at the hospital when doctors told her that her child could not make it.

I was very concerned about the boy, and went to his bedside and whispered to him, “Remember: Falun Dafa is good, Truthfulness-Compassion-Forbearance is good!” I repeated it a few times and he started breathing.

I turned to Han, who had just reached the hospital, and gave him yet another reminder. “Stop doing bad deeds to Falun Gong practitioners. Severing ties with the CCP will bring your family good fortune.” He started to cry and did not rebut what I said. His son was later transferred to the bigger county hospital.

I went to the county hospital the next day. Many of the child’s relatives were present. I saw that the child looked as he did when he was first knocked down. I repeated again and again to him, “Remember Falun Dafa is good. Truthfulness-Compassion-Forbearance is good!” He began to breathe smoothly again.

The child’s aunt was amazed by the boy’s improvement and urged everyone to follow my advice to quit the CCP. “Quick! Let’s all quit!” Everyone wrote down their names to quit the CCP.

Han himself knelt on the floor to ask for forgiveness from Master Li Hongzhi, the founder of Falun Gong. He promised not to persecute Falun Gong again.

The next day, Han’s wife took the x-ray result to the city hospital for verification of her son’s condition. Doctors told her there was no hope, as no surgery would stop her son’s brain hemorrhage.

On the ninth day, their son woke up, fully recovered. Han and his family were very grateful to Master for saving them.

Not long later, Han left the judicial system and stopped participating in the persecution.

Category: People in China Awaken to the Truth