(Minghui.org) During the celebration of the 17th World Falun Dafa Day in May 2016, a total of 103 greetings and proclamations were received from government officials of different levels in the State of New York. They praised Falun Dafa’s universal principles of Truthfulness, Compassion and Forbearance, and the benefits the practice has brought to more than 100 million people around the world.

In addition to the NewYork State Senate Resolution 4090, sponsored by Senator Jack Martins, which proclaims May 13, 2016 as Falun Dafa Day, State Senators from the 3rd, the 4th, the 42nd and the 55th districts issued greeting letters and proclamations for the occasion. 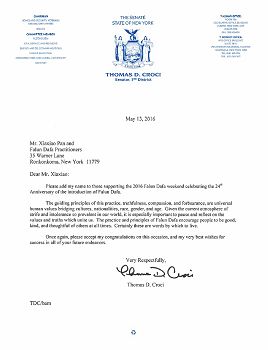 State Senator of the 3rd District, Thomas D. Croci, and his greeting letter

Senator Thomas D. Croci wrote in his greeting letter, “The guiding principles of this practice, truthfulness, compassion, and forbearance, are universal human values bridging cultures, nationalities, race, gender, and age. Given the current atmosphere of strife and intolerance so prevalent in our world, it is especially important to pause and reflect on the values and truths which unite us. The practice and principles of Falun Dafa encourage people to be good, kind, and thoughtful of others at all times. Certainly these are words by which to live.”

State Senator of the 4th District, Philip M. Boyle, and his proclamation

Senator Philip M. Boyle wrote in his proclamation, “For the past twenty four years, millions of people around the world have embraced the popular meditation and cultivation practices of Falun Dafa. Also known as Falun Gong, Falun Dafa is a peaceful spiritual practice rooted in traditional Chinese culture. It consists of meditation, exercise, and a philosophy centered on the values of truthfulness, compassion, and tolerance. Through their practice, people become healthier, happier, and more altruistic.” 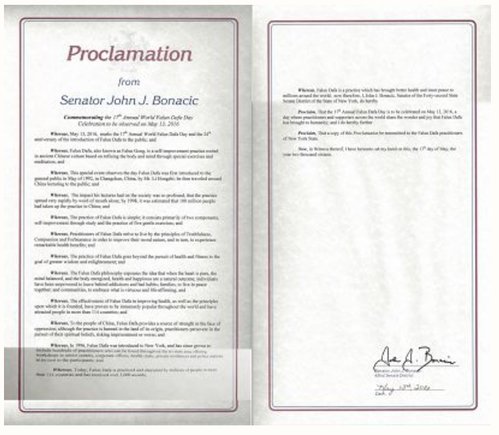 Senator John J. Bonacic wrote in his proclamation, “The practice of Falun Dafa is simple; it consists of primarily of two components, self-improvement through study and the practice of five gentle exercises…

“Practitioners of Falun Dafa strive to live by the principles of Truthfulness, Compassion and Forbearance in order to improve their moral nature, and in turn, to experience remarkable health benefits; and…

“To the people of China, Falun Dafa provides a source of strength in the face of oppression; although the practice is banned in the land of its origin, practitioners persevere in the pursuit of their spiritual beliefs, risking imprisonment or worse.”

State Senator of the 55th District, Rich Funke and his proclamation

Senator Rich Funke recognized the week of May 9-16, 2016 as Falun Dafa Week in the State of New York. The proclamation says, “Falun Dafa (also called Falun Gong) is a high level mind-body-spirit cultivation practice consisting of five gentle sets of exercises and teachings guided by the characteristics of the Universe – Truthfulness, Compassion and Forbearance…

“Falun Dafa practitioners all over the world, and throughout our great state, have dedicated countless hours to their communities in organizing free meditation classes, Chinese cultural productions of music and dance, and participating in local community events…

“Falun Dafa practitioners also actively work to bring about a peaceful resolution to the persecution of Falun Gong in China, and improve the future of the world’s most populous country.”