(Minghui.org) The 89th Session of Minnesota Senate passed Resolution SF2090 on May 20, 2016 “expressing concern over persistent and credible reports of systematic, state-sanctioned, forced organ harvesting from nonconsenting prisoners of conscience, primarily from Falun Gong practitioners imprisoned for their spiritual beliefs, and members of other religious and ethnic minority groups in the People’s Republic of China.”

Similar state-level resolutions have been passed in recent years by Pennsylvania, Illinois, Colorado, Maine, and Delaware. 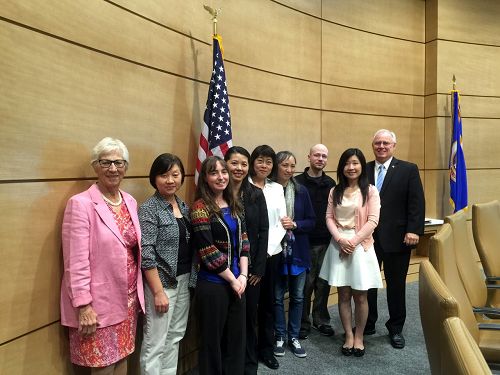 Overcoming several challenges, the resolution took over a year to pass. The Chinese Consulate in Chicago put pressure on the senators and sent mails twice defaming Falun Gong and denying the brutal persecution in China. However, these actions put a spotlight on the persecution, and more people supported the practitioners in calling for an end to the inhumane crime and bringing the perpetrators to justice.

“This resolution goes to the core of our society,” said Senator Dan Hall, one of the sponsors of the resolution, while speaking on the Senate floor. “This goes to the Freedom of Religion we have in America. And it is not just America that we care about. It is really the world we care about. Falun Gong have been persecuted. Their body parts have been taken from them, to give and sell to others, some of them from America.”

Senator Hall said he was visited by the group from the Chinese Consulate who said they do not practice persecution and resent these allegations. He then pointed out, “We have enough people that have given enough evidence that these things are going on and we need to stop it. America is the land of the free. In America, we believe in the freedom of religion, freedom of our bodies, and we should be a light shining against injustice wherever it is, any place in the world. We are a country that believes each one of us has a voice.”

Senator Alice Johnson, another sponsor, said on the floor, “The exposure of the crime of forced organ harvesting is an important step in ending the abuse. In 2014, in the book The Slaughter, Gutman estimated between 2000 and 2008, at least 65,000 Falun Gong practitioners were killed on the operating table. Presently Mr. Gutman doubled that estimate.”

Senator Johnson said she hopes that the passage of [SF]2090 will help to prevent organ harvesting from prisoners without their consent. She added, “This will happen if we continue to exert international pressure and concern. Awareness at every level is very crucial to ending the abuse. The torture and killing of innocent people who practice Falun Gong must end.”

Over the past two summers, Falun Gong practitioners collected more than 60,000 signatures in Minnesota, petitioning the UN human rights commissioner to act on this issue. The resolution had strong bipartisan support in the Minnesota Senate and was passed unanimously.

The text of the resolution is as follows:

expressing concern over persistent and credible reports of systematic, state-sanctioned, forced organ harvesting from nonconsenting prisoners of conscience, primarily from Falun Gong practitioners imprisoned for their spiritual beliefs, and members of other religious and ethnic minority groups in the People’s Republic of China.

WHEREAS, when performed in accordance with ethical standards, the medical discipline of organ transplantation is one of the great achievements of modern medicine; and

WHEREAS, organ transplantation depends on altruistic organ donation, which is based on free, voluntary, and informed consent of the donor; and

WHEREAS, free, voluntary, and informed consent cannot be guaranteed for death row prisoners who are deprived of their freedom and exposed to coercion; and

WHEREAS, forced organ harvesting is understood as organ procurement without prior free, voluntary, and informed consent, and includes the jeopardizing of the survival of the nonconsenting organ donor; and

WHEREAS, the People’s Republic of China implemented a regulation in 1984 that permits organ harvesting from executed prisoners, a practice that is banned by the World Medical Association and international ethical standards but continues unabated to date in China; and

WHEREAS, the organ transplantation system in China does not comply with the World Health Organization’s Guiding Principles of traceability and transparency in organ procurement pathways, and the government of the People’s Republic of China has resisted independent scrutiny of the system; and

WHEREAS, the Department of State Country Report on Human Rights for China for 2011 stated, “Overseas and domestic media and advocacy groups continued to report instances of organ harvesting, particularly from Falun Gong practitioners and Uighurs”; and

WHEREAS, Falun Gong, a spiritual practice involving meditative “qigong” exercises and centered on the values of truthfulness, compassion, and tolerance, became immensely popular in China in the 1990s, with multiple estimates placing the number of practitioners at upwards of 70 million; and

WHEREAS, in July 1999, the Chinese Communist Party launched an intensive, nationwide persecution designed to eradicate the spiritual practice of Falun Gong, including physical and mental torture; and

WHEREAS, the number of organ transplant operations in China increased by more than 500 percent within five years after 1999, corresponding with the onset of the persecution of Falun Gong; and

WHEREAS, the increase of transplant organs is not attributable to an overall increase in the number of death row inmates or to a public organ donation system or another publicly recognized organ source; and

WHEREAS, the Government of the People’s Republic of China has not provided any explanation for the sudden increase of donor organs and the short wait times of 1 to 4 weeks for kidney and liver transplants; and

WHEREAS, two Canadian researchers – David Matas, a human rights attorney, and David Kilgour, former Canadian Secretary of State for Asia-Pacific – conducted an investigation into allegations of organ harvesting from Falun Gong prisoners of conscience in 2006 and concluded, based on extensive circumstantial evidence, that the allegations were true and that tens of thousands of Falun Gong practitioners may have been killed for their organs; and

WHEREAS, in 2006, doctors from 17 Chinese hospitals admitted in phone calls with undercover investigators that they have used or could obtain vital organs of Falun Gong prisoners of conscience for transplant, with some of the doctors implicating local courts and security agencies in the organ procurement process; and

WHEREAS, Ethan Gutmann published findings that Chinese security agencies began harvesting organs from members of the predominantly Muslim Uighur ethnic minority group in the 1990s, including from Uighur political prisoners; and

WHEREAS, the United Nations Committee Against Torture and the Special Rapporteur on Torture have expressed concern over the allegations of organ harvesting from Falun Gong prisoners, and have called on the Government of the People’s Republic of China to increase accountability and transparency in the organ transplant system and punish those responsible for abuses; and

WHEREAS, Huang Jiefu announced in December 2014 that the People’s Republic of China will end organ harvesting from executed prisoners by January 1, 2015, while simultaneously stating that death row prisoners are citizens who have the “right” to donate their organs, and that their organs will be entered into the organ allocation program, and therefore the organ procurement from death row prisoners will continue under this new semantic terminology; and

WHEREAS, the aforementioned announcement made by Huang Jiefu has not been verified on official, publicly accessible Web sites or information boards of the Chinese ministry of health, and therefore remains an announcement by a single person, but not an announcement of the government; and

WHEREAS, the People’s Republic of China neither acknowledged the organ harvesting from prisoners of conscience, nor expressed the cessation of it; and

WHEREAS, the Declaration of Istanbul Custodian Group, the International Society of Heart and Lung Transplantation, and Doctors Against Forced Organ Harvesting expressed in public statements that the announcement to end the organ harvesting by January 2015 is not credible, but only a semantic alteration of the same practice; and

WHEREAS, in January 2015, the White House, in response to the petition “We the People,” expressed its opposition to China’s practice of harvesting organs from executed prisoners; and

WHEREAS, the killing of religious or political prisoners for the purpose of selling their organs for transplant is an egregious and intolerable violation of the fundamental right to live; and

WHEREAS, in September 2012, experts testified before the House of Representatives Foreign Affairs Committee that United States patients continue to travel to China for organ transplants and that the medical community continues cooperation and training with Chinese colleagues, creating the risk that they may be indirectly aiding abusive practices; NOW, THEREFORE,

BE IT RESOLVED by the Legislature of the State of Minnesota that it:

(2) calls upon the Government of the People’s Republic of China to immediately end the 15-year persecution of the Falun Gong, and the immediate release of all Falun Gong practitioners and other prisoners of conscience;

(3) calls upon the President of the United States to undertake a full and transparent investigation by the United States Department of State into organ transplant practices in the People’s Republic of China, and calls for the prosecution of those found to have engaged in such unethical practices;

(4) will take measures to initiate a registry for residents of Minnesota who travel abroad to receive organ transplants; and

(5) will take measures to ban the entry of those who have participated in illegal removal of human tissues and organs, and seek prosecution of such individuals should they be found on the soil of Minnesota.