(Minghui.org) Parisians had their first sunny day on June 5 after two weeks of rain. Falun Gong practitioners came to Human Rights Square in front of the Eiffel Tower, introducing the peaceful practice to the public and asking for support to stop the persecution of its practitioners in China.

While enjoying the good weather and the beautiful Falun Gong exercise music and movements, people were shocked by the brutality of the persecution, especially the state-sanctioned organ harvesting from living Falun Gong practitioners in China.

Tourists from different areas of the world, including Germany, Panama, Argentina, and Tibet, as well as numerous local residents signed the petition to condemn the persecution and support Falun Gong’s peaceful resistance.

Chinese tourists reading about the persecution. 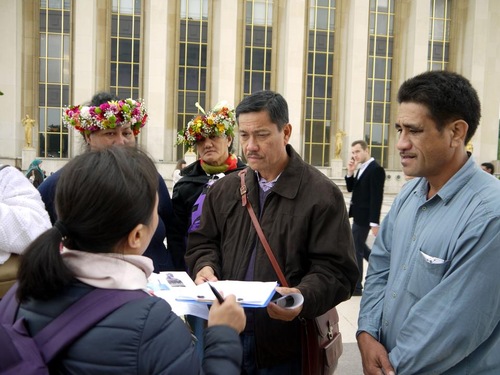 A government official from Polynesia signed the petition to support Falun Gong.

Jean-Marie Kawa, an electrical technician from Nouvelle Galedonie, could not believe the brutality of organ harvesting. “It must be stopped,” she said. “That is why I sign to support you. The Chinese government should be held accountable, and should treat its people better.”

A local policeman, Morales Eric, also condemned the organ harvesting: “It is shameless and horrible.” Another security guard said: “The Chinese people should stand up against the communist party. As long as the communist party is in power, they will never have freedom.”

Some people asked why they never heard about the organ harvesting in the news, and why the international community hasn’t taken more action to stop it. A practitioner explained that some governments choose to keep silent for economic interests, and this is why Falun Gong practitioners keep raising awareness to expose the brutality to the public.

Many Chinese tourists also viewed the materials. Some of them asked practitioners to help them withdraw their memberships in the Chinese Communist Party.