(Minghui.org) Hundreds of Falun Dafa practitioners gathered in front of the San Francisco City Hall on October 23, 2016, to form a Falun emblem and other related patterns. This was one of a series of activities associated with the upcoming annual Western Falun Dafa Experience-Sharing Conference on October 24.

Introduced by Mr. Li Hongzhi in May 1992, Falun Dafa is now practiced in more than 100 countries. The emblem consists of one large 卍 symbol in the center, surrounded by four small 卍 symbols and four Taiji symbols. The principles of Falun Dafa are Truthfulness-Compassion-Forbearance. 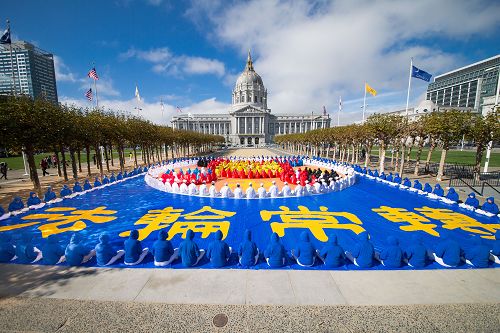 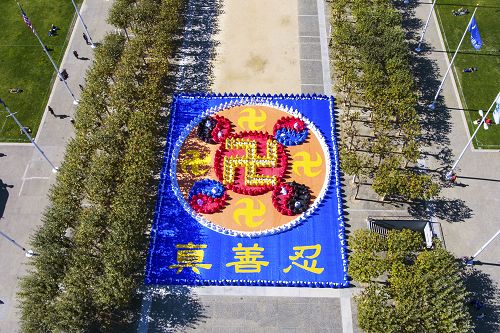 Impressed by the event, a group of tourists from Germany came up and talked with the practitioners. One tourist was a retired engineer from Nuremberg, who said he liked the meditation because it was “peaceful” and “it gives energy.” He took many photos of the event and was shocked to hear about organ harvesting from living Falun Dafa practitioners in China.

He added, “We need more activities like this because we need to let people know what is really going on in China.”

Four college students visiting San Francisco were also surprised to hear about the mistreatment of Falun Dafa practitioners in China for their beliefs. One of them, Mustafa, said, “This [the persecution] is horrible. How could one person kill others for their organs?” Another student said it is basic humanity for people to respect each other. 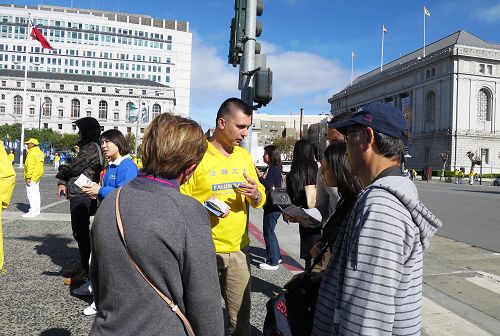 A practitioner explains to passersby about Falun Dafa and the suppression in China.

Mr. and Ms. Bozena, both immigrants from the Czech Republic, said they both believe that the practitioners’ activity was important. “I like it because it looks great,” said Ms. Bozena, who works in an opera house near the city hall.

Mr. Bozena said he knows the communist regime well from his own experience, and hopes the atrocity will end soon.

Hu Jinwei from China said he was happy to see the character formation event. “I heard about Falun Dafa back in China and I know the suppression is very bad. It is terrible that things like forced organ harvesting could happen in contemporary society.” 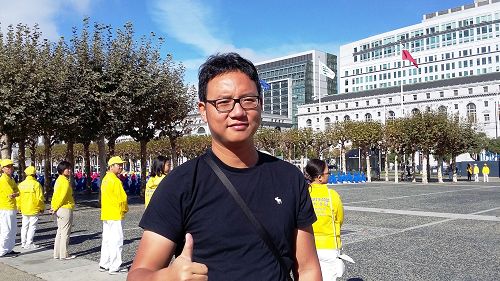 Hu Jinwei, an immigrant from China, said that the Chinese communist regime is destroying Chinese culture by suppressing Falun Dafa.

Speaking of the hate propaganda the communist regime has spread in China to mislead people, Hu encourage Chinese to think independently. He said, “When I was in China, I could overcome the Internet blockade with some software. I hope more people will do the same, that is, get access to uncensored information before reaching a conclusion.”

“After all, as human beings we have to be clear on what is good and what is bad in this world,” he said.