(Minghui.org) About 1,000 Falun Gong practitioners marched across the Golden Gate Bridge on October 23, one day prior to the annual U.S. Western Falun Dafa Experience Sharing Conference. Starting from Golden Gate Bridge Square, across the bridge to Vista Point in Marin County, the three-mile-long march was to call for support to end the severe suppression of Falun Gong in China. 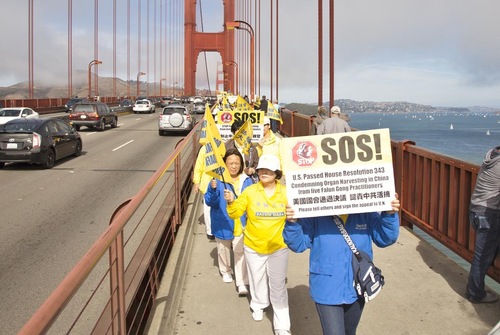 About 1,000 Falun Gong practitioners march across the Golden Gate Bridge on October 23, raising awareness about the persecution in China.

News reporter: “This [Persecution] Is Insane”

Esvim from Santa Monica in Southern California is a news reporter that covers political news. She and her assistant Les met practitioners during the march. “I have heard about black market organ trade in China. But such a large scale operation of forced organ harvesting is even worse—this is insane,” she said.

She encouraged practitioners to continue their efforts, saying, “You are doing the right thing. The U.S. government needs to take more action to press China on organ transplant tourism, as well as work with other countries to stop such a crime.” She said he will check into this and help spread the information.

Esvim, a news reporter from Santa Monica, California, and her assistant Les, talk with practitioners.

San Francisco resident Adam and his mother were walking on the bridge when they encountered the Falun Gong march. Adam thanked practitioners for bringing the issue of organ harvesting to his attention, “This suddenly opened my eyes.”

Adam works for a social media company and says he will let more people know about this. He and his mother said the march was “peaceful” and “beautiful.” 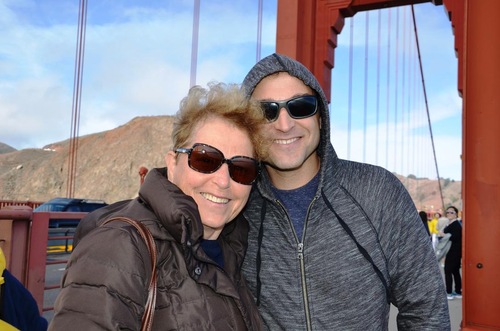 Adam, an employee of a social media company who was visiting the Golden Gate Bridge with his mother Tamar, said the Falun Gong march opened his eyes.

Law Professionals: I Support You

Linda, a retired assistant lawyer of a child protection organization, said she had not heard about forced organ harvesting. “I support you,” she said to a practitioner. Pointing to a small yellow flag a practitioner held with words of “Falun Dafa is good,” she added, “If I can have such a flag, I will walk with you to stop the persecution.” 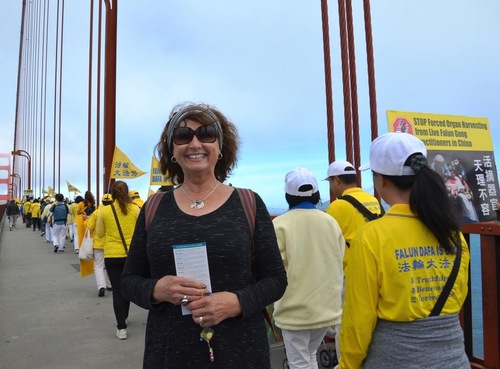 Lin, a retired Australian lawyer, was visiting the Golden Gate Bridge with her son Nicolas, a college student in the U.S. “We know the communist regime wants to control people’s minds and I believe your message is reaching a lot of people today,” she said. 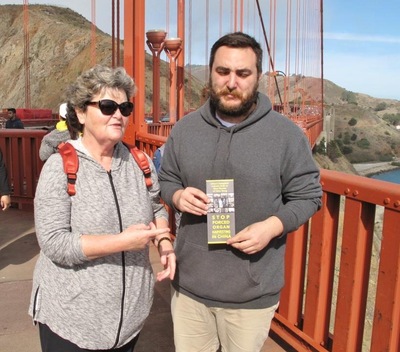 Retired Australian lawyer Lin and her son said the event is very important.

Mr. Xia, a visitor from Hubei Province in China, was surprised to the large-scale event by Falun Gong practitioners. “It is impossible to see a large group do these exercises and march like this in China.”

Another China tourist walked with practitioners for a while. He decided to withdraw his membership in the Chinese communist organizations to take a stance against the regime’s brutal crimes and said he would read more about Falun Gong. 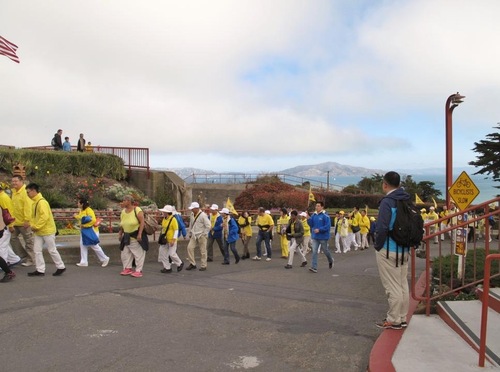