(Minghui.org) Falun Gong practitioners in Europe exposed the Chinese Communist Party’s (CCP) brutal persecution during the European Parliament’s (EP) last plenary session before summer break in Strasbourg, France, on July 4-8, 2016. Practitioners held group exercises on the grass near the parliament building. Attendees of the plenary session talked to practitioners to obtain detailed information, including about the CCP’s crimes of harvesting organs from living practitioners. Many signed a statement calling for the European Parliament to investigate the CCP’s organ harvesting.

European Falun Gong practitioners collect signatures from attendees of the EP plenary session on a statement calling for the EP to investigate the CCP’s organ harvesting crimes.

Mr. Michael Oberli, an employee of the EP, signs the statement and plans to spread the news to his colleagues. 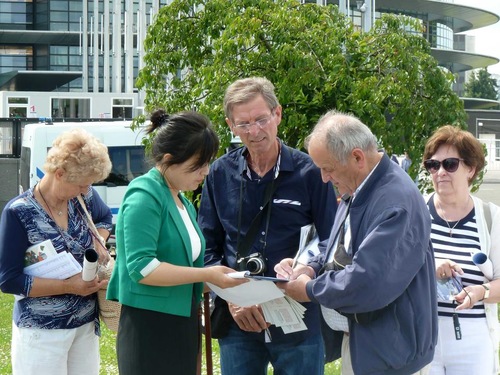 Falun Gong became a topic of discussion among the attendees of the EP session. Some members of EP not only signed the statement, but also came to express their support of Falun Gong practitioners in person.

Ms. Renata Briano, a member of the EP from Italy, took a photo of herself in front of the Falun Gong practitioners’ group exercises. She said she would post the picture on her Facebook account to let more people see Falun Gong.

Chinese Attendee of EP Session Shocked by the Atrocities

Philip and Anna from Switzerland said, “How can we not sign on seeing it (organ harvesting)?

Stephanie and her mother both signed the statement supporting Falun Gong’s work opposing the persecution. Stephanie said, “Such [atrocities] must stop!” Ingrid added, “We are living in modern society. We can’t allow such things to happen. I hope the world will be become a better place.”

(Minghui.org) 26-year-old Christian Carpineta from Italy stood in front of some posters near the Eiffel Tower reading about the brutal persecution of Falun Gong in China. He began asking questions to some practitioners who were there raising awareness about this spiritual practice that’s been persecuted since 1999.

Learning that Falun Gong is rooted in traditional Chinese culture with core principles of Truthfulness-Compassion-Forbearance, Carpineta commented, “It’s not just China’s treasure, it’s the world’s treasure, the treasure of mankind.” 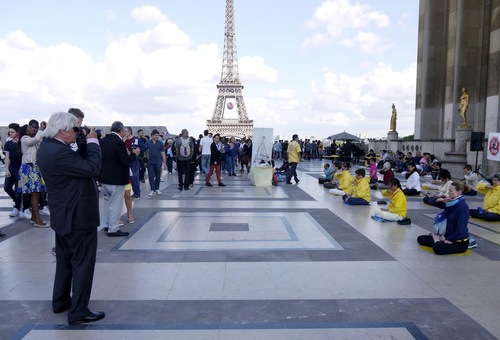 Many visitors read the posters and learned about the persecution of Falun Gong in China.

One of many who stopped at the Falun Gong display on June 26, Carpineta currently resides in Nantes in Western France, and works at a nursing home. He told a practitioner that this was the first time he heard about the persecution.

“I pay special attention to persecutions, especially those against people of faith. China has a special place in history. However, because of the Cultural Revolution, its spiritual beliefs are persecuted and historical relics destroyed. The country has come to a dangerous stage.”

Encouraging the practitioners to continue their efforts, he said, “We need to make people aware of what is happening in China and cherish this practice.” 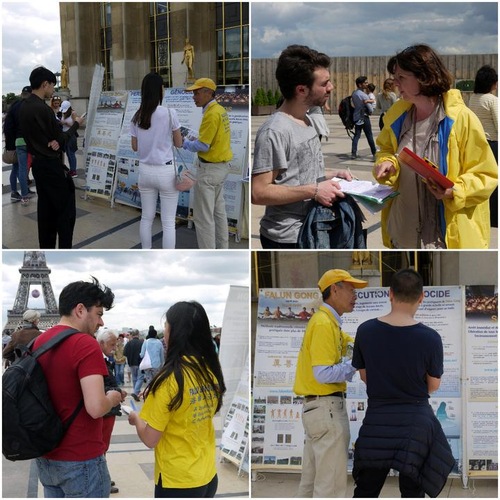 Many visitors read the posters and talked to practitioners

Carlos Meldenes signed the petition demanding that the persecution stop after he learned about China’s state-sanctioned organ harvesting from living Falun Gong practitioners incarcerated for their faith.

“This is a crime of genocide, a bloody slaughtering. If it was done by a regime, then the regime is guilty,” Meldenes said in an outraged tone. “You must let everyone know that the Chinese communist regime is committing a crime against humanity.”

Cecile from Paris is an 80-year-old Christian woman who understands religious persecution. After she signed a petition, she said, “I want to help fight for your rights. You are doing great work. Keep it up!”

(Minghui.org) “My Parliament Member co-sponsored the resolution, because we are worried about the human rights situation in China. We know [about] the persecution of Falun Gong, so we want to join your peaceful resistance. We support you,” said Lukas Bachta, an assistant to a Member of the European Parliament (MEP) to Falun Gong practitioners in front of the European Union (EU) building in Strasbourg, France.

Lukas Bachta, from the Czech Republic, said that he and his MEP want to help stop the illicit organ trade in China. He took part in the practitioners’ group exercises for 30 minutes.

Falun Gong practitioners held activities in Strasbourg the week of June 6 while the European Parliament (EP) was in session. They gathered to show their support for the statement (48/2016) cosigned by 12 MEPs asking the European Parliament to investigate the state-sanctioned organ harvesting of prisoners of conscience in China, the majority of whom are Falun Gong practitioners. If half of the MEPs sign the statement, the request will automatically become a resolution.

Talking to the public about the atrocities taking place in China

Many MEPs met with practitioners over the week. So far, more than 100 have co-signed the statement. Some staff members from MEP offices attended the practitioners’ event, signed the petition, and asked for more information about the forced organ harvesting.

Bertrand, an EU staffer, remarked, “Falun Gong is peaceful. I am interested in it. I see your compassion, which is permanent. The persecution is meaningless and ugly. You will win.” 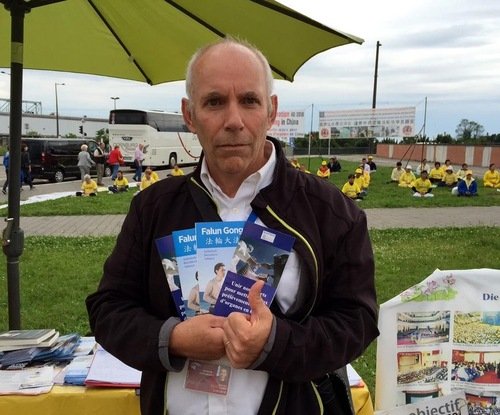 Bertrand, an EU staff member, signed the petition against forced organ harvesting in China. He said, “I want to help, so that Falun Gong [practitioners] can freely practice their belief, and the world will be a better place.”

Raphael Mukandila Ngalula from Congo had talked to practitioners last month while the European Parliament was in session, and learned about the organ harvesting atrocities in China. He was in Strasbourg to meet with MEPs. “This is intolerable in the 21st century,” he said. “Keep up your good work. People in China should have the freedom of speech, just like the Europeans. They should enjoy justice, tolerance, and freedom of thought. These are the values that the Chinese government should accept and promote.”

Raphael said that he brought up the organ harvesting in China during his meetings with the MEPs, and urged them to co-sign it. One of the MEPs from France did sign the statement.

Nicolas, a reporter from a French student radio station, talked to practitioners for an hour. He came back the second day for a more detailed interview and also signed the petition.

Fabienne Saits from France had never heard about the persecution of Falun Gong. “I was shocked. It is terrifying. It has never been reported by any media,” she said. A practitioner told her that many governments and organizations have chosen to turn a blind eye to this atrocity out of concern for economic interests. Fabienne noted that overemphasis on economic interests sometimes hurts people.

She was on her way to a meeting and said she would collect signatures from the 100-plus attendees who would be there. She added that she would also ask her MEPs for help. “We support you. Our hearts are always with you. I will tell more people about this,” said Fabienne.