(Minghui.org) Practitioners in Baden-Württemberg, Germany, held an event at Freiburg im Breisgau on October 10. Many residents in this university city signed petitions to support those filing lawsuits against Jiang Zemin for persecuting Falun Gong.

Jiang, a former Chinese leader, started the persecution of Falun Gong. He became the top Chinese communist official in 1989 and continues to influence Chinese politics even after his retirement in 2002. Several key staff members in his caucus, such as Zhou Yongkang and Xu Caihou, have been taken down during recent political turmoil. Both of them played instrumental roles—in the police and military systems, respectively—during the 16-year-long suppression of Falun Gong.

A middle-aged man said he usually did not sign petitions, but what was being done to Falun Gong practitioners in China, especially the harvesting of organs from living practitioners, made him change his mind. “This is a crime against humanity, and Jiang should be brought to justice,” he said. “Nobody should tolerate this.”

One woman said that this persecution was “unprecedented,” because even the Nazis did not harvest organs from the living. “It’s bad this [live organ harvesting] has happened, but event worse we did not know it.” She encouraged practitioners to continue telling more people about it.

A woman who had learned learned Chinese at the University of Freiburg suggested that the practitioners go to the university and inform faculty members about the severe human rights violation.

“There is a Confucius Institute (Hanban) at the University of Freiburg,” she said. It comes from the CCP, and the college budgets for it.” She said that, since faculty salaries and other expenses are paid for by taxpayers, school officials and faculty members need to know what brutal things are taking place in China. 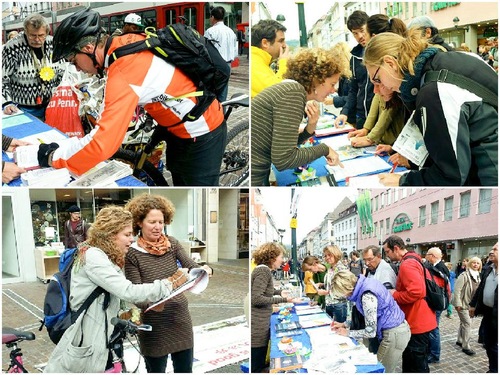 A Chinese woman that stopped to talk with practitioners looked at a pamphlet that debunked the CCP hate propaganda. She said she personally knew one of the participants in the staged Tiananmen Square self-Immolation incident. “We lived close by and, as far as I know, she was not a Falun Gong practitioner.”

A Chinese student who recently came to study abroad said he was familiar with software that could overcome the Internet firewall. “Many friends and I all know the Communist Party has been cheating people for decades. The Party is hopeless.”

Pointing to one of the practitioners’ banners, he said his entire family agreed with the principles of Truthfulness-Compassion-Forbearance. “My grandma often told us this is a universal law, because everyone will benefit from it. It’s the Chinese Communist Party that promotes theories to harm people.”

After reading the Nine Commentaries on the Communist Party, the student’s father recommended the book to him, “Read it, and you will not be fooled by the Party anymore.”

Since the book was published in November 2004, more than 210 million Chinese have announced their resignations from the CCP and its organizations.