(Minghui.org) Twenty years ago on October 12, Master Li Hongzhi taught Falun Gong lectures in Houston for the first time. To celebrate the 20th anniversary of Falun Gong’s introduction to Houston, practitioners held an experience-sharing conference and a group exercise in Hermann Park on October 9, 2016. 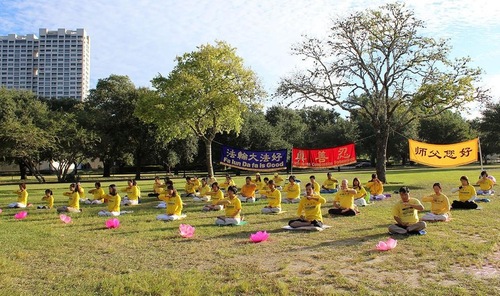 A participant, Ms. Zhang, said taking up Falun Dafa cultivation was the best choice she’s ever made. The book Zhuan Falun changed her view of life, and answered questions she had for years. She began to follow Truthfulness, Compassion and Forbearance in her everyday life, and truly cultivate herself through looking inward during conflicts instead of blaming others, she said.

(Minghui.org) Seventeen years ago, the illegal arrest of 45 Falun Gong practitioners in Tianjin led to a peaceful appeal in Beijing joined by about 10,000 practitioners. Three months later, Jiang Zemin launched the nationwide suppression that is still ongoing.

Practitioners from Chicago and Houston went to the Chinese consulate over the weekend, calling for an end to the persecution.

With banners reading “Stop persecuting Falun Gong” and “Falun Dafa teaches Truthfulness-Compassion-Forbearance”, Chicago practitioners gathered by the street across from the Chinese Consulate at 5 p.m. on April 23.

Practitioners Ding Xiangyu and Andy Darin recalled the peaceful appeal 17 years ago. Yang Sen, coordinator of the Mid-USA Falun Dafa Association, said the incident had historical significance. “The firm belief of Falun Gong practitioners, based on the principles of Truthfulness-Compassion-Forbearance, is safeguarding the spirit and core values for both China and the entire human civilization.”

Peaceful protest by Falun Gong practitioners in front of the Chinese Consulate in Chicago on April 23, 2016.

“We believe that truth will bring the defamatory propaganda to an end. And we believe more Chinese will act upon their conscience to support justice. By supporting Falun Gong practitioners, and by supporting the common good, they are walking towards a better future, for themselves and for the nation.”

Through the years, many young practitioners in China have suffered tremendously, just like adults. Sun Xinyu, a 23-year-old engineer working in Springfield, began to practice Falun Gong at the age of four. “Falun Gong taught me to be nice to others.” By knowing what is right and what is wrong, it was easy for him to stay away from bad habits and other temptations.

The harsh suppression was nonetheless a major challenge that Xinyu had to face every day when he was China. “Although Falun Gong taught us to be better people, the slanderous propaganda in China misled my classmates and teachers. They could not understand me and treated me badly.” Despite the huge pressure, Xinyu said he did not give up his belief.

Sun Xinyu, 23, works as an engineer in Springfield

The event included a candlelight vigil at dusk. Many people learned about the persecution in China. Two Spanish tourists, Antonio and Christian, listened attentively as a practitioner explained to them what Falun Gong is and how practitioners have been mistreated in China for their belief.

“Thank you for telling us these things,” Christian said to the practitioner, “We’d never heard about it before. But this is very important.” He said that he would forward the pictures he took about event to El Mundo, the second largest newspaper in Spain.

Practitioners in Houston went to the Chinese consulate at 9 a.m. on April 25 to raise awareness of the suppression in China. Many passersby stopped to learn more, and some signed petitions to support the practitioners.

Two pedestrians in their 60s said that they had heard about the persecution before and were glad to help. Several drivers also stopped at the intersection to get information materials.

Houston practitioners called for an end to the persecution in China.

Two men asked a practitioner to help them quit the Chinese Communist Party (CCP) organizations. The older one thanked the practitioner, “Glad to talk with you today. Each of us has to follow his or her own conscience.”

Hard to Believe, an award-winning documentary on the forced organ harvesting from living Falun Gong practitioners in China, was screened at a meeting room of Southwest National Bank two days earlier.

After watching the film, one of audience, Mr. Li, said he was severely disturbed by the heinous crimes committed by the CCP. Another audience member, who used to work in China as a medical professional, said, “I believe what we have seen in the film. What we saw is hideous, but does happen in China.”

This year’s show is all new, and presents timeless legends and tales portrayed with original choreography, music, digital backdrops and costume design. Shen Yun’s four dance companies will perform in over 100 cities in the Americas, Europe, East Asia, and Oceania in the upcoming season.

Welcome Letters and Commendations from Over Twenty Officials 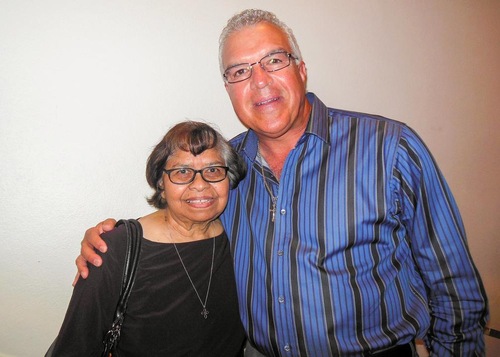 Michael Menchaca, damage prevention manager of an oil and gas company, with Livia Guajardo at the Jones Hall for the Performing Arts on December 23

“This is so genuine, loving, and pure.. It was very nice,” said Mr. Menchaca, the damage prevention manager for an oil and gas company.

He shared his inspiration from the performance, “My soul is wonderful, it just rekindled…It just made my heart get away from the world outside and see what we have to look forward to.”

“There is a heaven and that we will be there one day. And we come from heaven, and we will go back to our home one day,” Mr. Menchaca added.

Nick Flores, an executive with a medical company

Mr. Nick Flores, a medical company executive, was amazed to find the spirituality presented in the show seem familiar to him. “I was very surprised to see that the beliefs are the same,” he said.

“In a sense that we come here knowing that we’re not going to be here forever and that we come and we suffer. Everybody suffers in their own way and that at the end there is a sort of, you could say a rainbow, at the end of a storm or something like that,” Mr. Flores explained.

“The Show Tonight Was the Most Amazing”

“It was more than amazing. It was more than what I would have ever expected,” exclaimed businessman Rene Puente. “I would not imagine that you could do so much just through dance, and speak so many words and emotions.”

“I felt much love, compassion, understanding. And I know how to maybe treat people. Just pure love,” he said.

Mr. Puente was impressed by the experience, “I think every time the curtain went up, it was just exhilarating…The show tonight was the most amazing.” 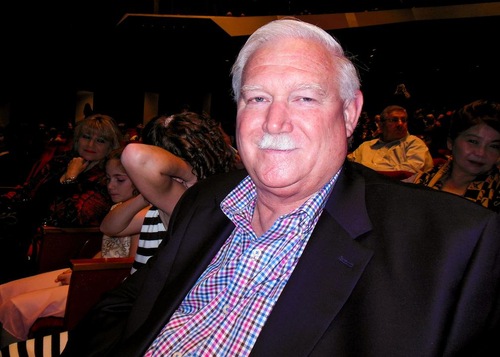 “It certainly shows the generations in China…Very artistic and pleasing,” he continued.

An inspiration Mr. Hart received from the performance was “to examine one’s inner self and to make yourself relax with life.”

Stephen Borden, Vice President of sales for Honeywell, with his wife at the performance on Dec. 22

He thought the show was “very inspiring” and “spiritual.” “It really shows the Chinese people are connected spiritually to the earth and to the heaven above,” he said.

“Very well done. The culture, the representation of the culture was wonderful. I truly enjoyed it,” said Mr. David Harris, a civil engineer for Harris Engineering.

He was most impressed by Shen Yun’s revival of traditional art forms, “It is absolutely beautiful and it should never have been [lost].”

(Minghui.org) Falun Gong practitioners introduce the spiritual practice and expose the persecution in China to people in Houston’s Chinatown, where many among the city’s Asian population visits on weekends.

One shop owner is Mr. Chen. He came out of a supermarket one day this July. Rebecca, who practices Falun Gong, stepped forward and talked to him about the Chinese Communist Party (CCP)’s human rights abuses and its crimes in persecuting Falun Gong, including killing imprisoned practitioners to harvest their organs for profit. She also mentioned that many people practice Falun Gong in Taiwan.

Mr. Chen listened attentively and said that he came from Taiwan and know about things happening in China, and that he wanted to know more about the persecution of Falun Gong there.

He would greet the practitioners when he ran into them. He also brought them tea when he saw them standing in the hot summer. “You work hard! I can see you practitioners wherever I go. I saw a lot of Falun Gong practitioners in Taiwan. I admire you,” he said.

He talked with Rebecca and narrated his frustration: though he had a shop, he was always preoccupied with his business and money; but with time passing, he felt that his life was becoming less meaningful.

Rebecca told him, “The purpose of life is not for money or travel. The most important purpose is to return to one’s true self.” Hearing that, Mr. Chen asked to read Falun Gong books. The next day, Rebecca gave him a copy of Zhuan Falun. She saw him a week later. He had read Zhuan Falun and said, “Falun Dafa is great!”

The Meaning of Withdrawing from the CCP

Mr. Xu, another visitor to Chinatown, said that he never joined the CCP or its youth organizations when a practitioner asked. His family had been persecuted by the Communist Party, but he did not understand the meaning behind people withdrawing their memberships in the CCP.

He asked, “Do you hate the Party?”

Rebecca answered, “We don’t hate it, though it persecutes Falun Gong practitioners and even harvests their organs. We are practitioners and have no hatred of anyone. But the perpetrators must be brought to justice. All members of the CCP will be implicated in its crimes if they don’t quit. We are here today to raise awareness of the persecution and advise people to quit the Party for a safe future.”

Mr. Xu later brought bottled water to the practitioners and gave them encouragement.

An elderly woman saw the practitioners outdoors frequently. She worried that they were tired and didn’t have time to eat. She bought a boxed lunch for Davina one day. Davina was grateful and wanted to pay her. “How much does it cost?” The elder lady said, “I’m a Chinese in my 90s. Don’t talk about money.”