Falun Gong practitioners were invited to give a presentation and demonstration of the meditation exercises, both in the morning and in the afternoon.

Falun Gong practitioners demonstrate the exercises at the Italian Sporting Games on September 6.

Many people were interested in the learning the exercises. Some signed petitions calling for an end to the brutal persecution in China.

While reading a flyer about Falun Gong and the persecution, a woman said, “Anyone who did this [persecuting Falun Gong practitioners] will be punished by heaven, because their crimes are unforgivable.” 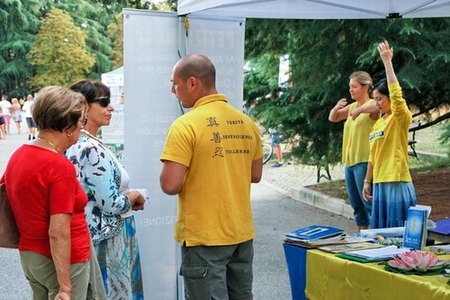 (Minghui.org) The City of Prato sponsored a public screening of the documentary film Free China in the historic Emperor’s Castle (Il Castello dell’Imperatore di Prato) on August 24. In response to audience request, Director of the Department of Culture, Mr. Simone Mangani decided to add an additional screening that same night.

Prato has the largest Chinese population in Italy, and there were many Chinese people in the audience.

A well-attended screening of the documentary Free China at Prato’s Castello dell’Imperatore.

The award winning Free China: The Courage to Believe tells the story of Falun Gong practitioners in China and overseas who remain courageously persistent in their belief in the face of the Chinese Communist Party’s (CCP) brutal suppression.

After seeing the film, many audience members expressed their support for Falun Gong practitioners’ endeavors to expose the persecution and encouraged them to show the film to a much wider audience.

Viewers were deeply disturbed by the CCP’s forced organ harvesting of persecuted Falun Gong practitioners. “The film provides a unique view of China,” said Mr. Poli, president of the Prato Lions club of Lions Clubs International. “China is a country with 5,000 years of history and an advanced civilization. Unfortunately, materialism has become so popular and profit has become the only focus. However, human beings have a spiritual side. I think we ought to promote the film in larger cities.”

TV Prato reported on the documentary screening the following day.

(Minghui.org) The issue of forced live organ harvesting from Falun Gong practitioners has garnered a fair amount of attention in Italy recently, both in the media and in the Senate. Evidence and expert testimonies were presented at a Senate hearing organized by the Human Rights Committee in the Italian Parliament on December 19.

Major Italian media outlets such as Corriere della Sera (Evening Courier) and RAI (Radiotelevisione Italiana) reported on the hearing and exposed the crimes of organ harvesting in China.

A screenshot of the RAI online article: “Shocking Report: Prisoners Killed for Their Organs.” RAI is Italy’s national public broadcasting company, owned by the Ministry of Economy and Finance.

“People at the Commission on Human Rights Senate hearing were shocked to hear of the systematic and forced removal of organs from prisoners of conscience in China, especially Falun Gong practitioners,” So begins the RAI report.

“I cannot summarize so many years of investigation in just a few minutes,” said Mr. Matas as he began his testimony at the Senate hearing. He started his independent investigation on organ harvesting in China in 2006.

Prior to his investigation, a reporter from a Japanese TV station and the wife of a Chinese surgeon broke the news in the United States. These two witnesses revealed that Falun Gong practitioners detained in a labor camp near a hospital in northeastern China were used as a live organ pool. When the hospital needed an organ for transplant, they would search for matching organs in the labor camp. When a match was found, this practitioner’s organs were subsequently sold, and he or she would be killed in the process.

A patient from Europe or other countries can get a matched organ in a matter of one to two weeks. Such a patient normally has to wait for years in Europe. Mr. Matas and Mr. David Kilgour, a former Canadian diplomat and crown prosecutor, have concluded that 41,500 Falun Gong practitioners were subjected to forced organ harvesting between 2000 and 2005.

Despite the brutal persecution in China, the peaceful practice continues to gain popularity worldwide. Major local media in Prato, a city with a large Chinese population in Tuscany, Italy, recently reported on Falun Gong practitioners’ weekly Saturday exercises in Chinatown. The TV interview attracted quite a few Chinese visitors. Some of them took materials regarding the persecution. The news was broadcast on TV Prato during prime time on November 30, 2013.

Category: Falun Dafa in the Media