(Minghui.org) Chloe, a young girl from a small town near London, UK, went to downtown London with her brother and grandparents on the afternoon of October 1. At Trafalgar Square, they came across Falun Gong practitioners raising awareness of the persecution of Falun Gong in China, despite the steady rain.

Chloe was drawn by the demonstration of the Falun Gong exercises. She followed along with the movements for the first exercise and learned them quite quickly. This was her first introduction to Falun Gong.

Chloe follows along to learn the first of the Falun Gong exercises.

Many passersby took notice of her as she learned the exercises with the practitioners. Large banners reading “Falun Dafa is good,” “The world needs Truthfulness-Compassion-Forbearance” and “Bring Jiang Zemin to justice” were also on prominent display.

After finishing the exercises Chloe said, “I feel relaxed, at peace, and I feel great!”

A practitioner handed her an origami lotus flower with a bookmark with the words “Falun Dafa is good” printed on it. The practitioner told her and her grandparents that they could learn more about Falun Gong (also known as Falun Dafa) online.

Falun Gong was made public in 1992 in China and soon became very popular due to its marvelous effect on health improvement and morality. Out of paranoid for losing control and jealousy, Jiang Zemin, as head of the Chinese Communist Party, overrode other Politburo standing committee members and launched the violent suppression of Falun Gong in 1999.

The persecution has led to the deaths of many Falun Gong practitioners in the past 17 years. More have been tortured for their belief and even killed for their organs in the state-sanctioned persecution. Jiang Zemin is directly responsible for the inception and continuation of the brutal persecution.

Under his personal direction, the Chinese Communist Party established an extralegal security organ, the “610 Office,” on June 10, 1999. The organization overrides police forces and the judicial system in carrying out Jiang’s directive regarding Falun Gong: to ruin their reputations, cut off their financial resources, and destroy them physically.

Falun Gong practitioners across the world conduct raise awareness of the ongoing persecution and call for help to end it as soon as possible.

(Minghui.org) Two high school students who encountered Falun Gong at a public demonstration in London were inspired to bring the message to their school.

On May 26, 2016, Felix Walker and Martin Quick brought a series of informative activities to their high school, Lycée Français Charles de Gaulle, a prestigious French language school in South Kensington.

They organized a presentation on Falun Gong, a documentary screening, and a guest speaker whose parents were persecuted in China for practicing Falun Gong.

Felix Walker (right), Martin Quick (left) and their friend Oliver at the Falun Gong presentation at their school.

Felix and Martin are 17-year-olds who are half French. Martin first met Falun Gong practitioners three years ago in front of the Chinese Embassy as they were protesting against the persecution of Falun Gong in China. Martin and his father received a flyer about the persecution.

After months of efforts, they made it happen. Their economics teacher agreed to use her class time to hold the two-hour event. Close to 100 teachers and students attended. Some students even switched their class time in order to attend.

Teachers and Students Alarmed by the Brutality of the Persecution

Felix and Martin took turns introducing Falun Gong and gave an overview of the persecution, the Chinese Communist Party’s crime of harvesting organs from living Falun Gong practitioners and the investigation results.

Following their presentation was a screening of the award-winning documentary Free China: The Courage to Believe. The teachers and students looked absorbed while watching the 50-minute film.

After the film, a Falun Gong practitioner, Amy, spoke on her parents’ personal experience of being persecuted in China. They had been imprisoned for 15 years and 11 years. Her father had been cruelly tortured in prison. Many students had tears their eyes as the listened. They asked many questions about how to stop the persecution and what they could do to help.

The teachers sincerely thanked Falun Gong practitioners for their efforts. Each student took a flyer from Felix or Martin so they could help spread the message.

“It’s Relevant to Everybody”

Talking about the purpose of organizing this event, Felix said, “We want our classmates to know about Falun Gong.” He thought the persecution and organ harvesting were very serious crimes. “It’s relevant to everybody.”

Martin said the persecution was an extreme violation of human rights in the world, and it must be known to the world. He said, “You rarely hear news about the persecution of Falun Gong, actually never. We simply want to show what is happening in China, because, as said in the film, these are covered up and aren’t widely known…We feel compelled to do something to stop the persecution. That’s the first reason why we decided to organize this activity.”

Felix added, “I noticed many people were touched by Amy’s story. They looked sad and shocked, because they had never heard about it. I believe most people will tell their family and friends about it.”

The process of getting the activities approved was harder than they thought. Even though the school administrators initially approved it, the decision was changed later because one of the teachers objected. Felix and Martin realized this teacher had misunderstandings about Falun Gong. They studied and analyzed more information about Falun Gong before they approached the teachers again.

Martin explained, “Some people didn’t want us to organize this activity, because what they had heard was from the Chinese Communist Party. We had to work hard to convince them But we learned that if you want to do something or tell people the true story, you must persist, and must work hard.”

The boys did a lot of investigation, including information from the United Nations, the investigation report by David Matas and David Kilgour, two Canadian experts who investigated the claims of forced organ harvesting from Falun Dafa practitioners in China, and the work by Doctors Against Forced Organ Harvesting (DAFOH).

“The data was very convincing,” said Felix. “The Chinese Communist Party claimed the organs mainly came from family members, but it’s not true. In one year, there were 300 liver transplants, but it suddenly jumped to 1700 the next year. There is obviously some inside story.”

Felix and Martin hope to organize another activity in their school in a few months to show a documentary focused on the issue of organ harvesting from living Falun Gong practitioners.

(Minghui.org) Falun Gong practitioners from London gathered at St. Martin’s Place on May 21, for an event to raise awareness of the 17-year persecution in China.

Falun Gong activity at St. Martin’s Place in London, to raise awareness of the persecution in China.

The activity was widely supported by people from all walks of life. Many tourists and local residents signed the petition to support Falun Gong’s peaceful resistance.

Philip and his daughter sign the calling for an end to the petition.

Retired engineer Philip had heard about Falun Gong before, but he was not aware of the brutal persecution that has been ongoing for so long.

“This must be stopped immediately,” said Philip and he and his daughter talked to practitioners for a long time. They could not understand why a government would suppress such a peaceful cultivation group. A practitioner explained that the teachings of Falun Gong, centered on Truthfulness-Compassion-Forbearance, are opposite to the communist party’s ideology, and the party is afraid of this traditional belief and of losing the control of people’s thoughts.

Philip believes that he sees the reason of the persecution now. “This is due to the tyrants’ paranoia. They are worried about losing their power, so they harass and suppress their own people. This is what Stalin did in Russia, and now the Chinese Communist Party has the same worry.” 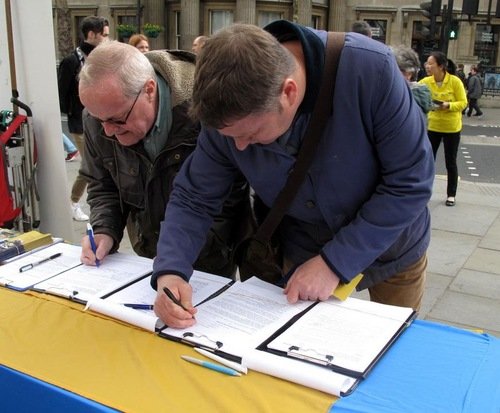 McCoy hopes that his signature will help stop the persecution.

Retired librarian McCoy simply could make a connection between the persecution and the peaceful meditation in front of him. He’d heard about the persecution a few months ago, and today he signed the petition. “The persecution has gone too long. It is time to end the communist party,” he said.

Dan would like to learn more about Falun Gong.

Dan has seen practitioners’ peaceful protests in front of the Chinese Embassy many times, and always wanted to learn more about Falun Gong. Today, he asked practitioners many questions, and signed the petition. “I should have come to learn earlier and done more to help stop the persecution,” he said.

Retired physician Pitt was shocked when she heard about the state-sanctioned organ harvesting from living Falun Gong practitioners in China. She said, “I feel shame on my Chinese colleagues [who are participating in the illicit organ harvesting].” She signed the petition calling upon British lawmakers to help stop the organ harvesting.

Two local school teachers praised the practitioners’ efforts. “Well done. You should let more people know about the persecution,” one said when signing the petition. “We wish you success!” 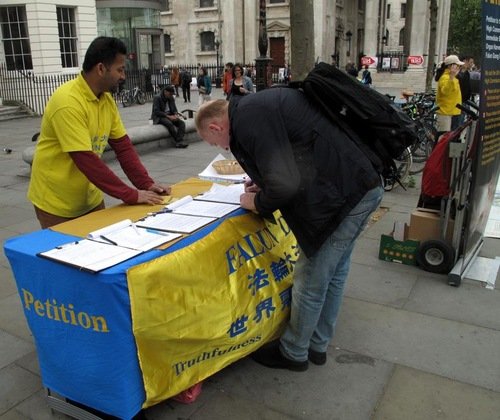 After talking to practitioners for an hour, an Italian tourist, who had never heard about Falun Gong, signed the petition.